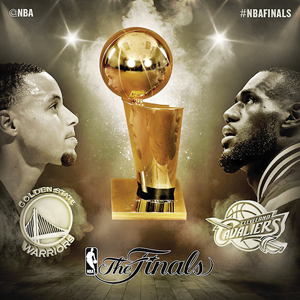 The Golden State Warriors survived a classic LeBron James performance and beat the Cleveland Cavaliers 108-100 in overtime of Game 1 of the NBA Finals. Following game 2 and 3 the Cavaliers, with the help of LeBron James, swooped the Warriors off their feet with an unforgettable defeat but the Warriors weren’t going to let the Cavs have the win that easy as they tied the series 2-2 on Thursday June 11th and ultimately won the NBA Championship 2015. Looking back through history and noticing the struggle both teams have had to prove their teams are the best in the game, has been rough. The Warriors with a 40-year gap of no championships and the Cavs trailing right behind with zero championships ever have failed to prove anything. But it seems that no matter the outcome, both teams have gone in swinging and have already won much respect from their cities and fans as the only two teams left standing for the 2015 NBA Finals.

The road to the NBA Finals hasn’t been an easy one for either team or for the teams’ main stars, MVP Stephen Curry of the Warriors and the NBA’s Most Valuable Player LeBron James of the Cavaliers. This year’s Finals may be more about these two MVPs battling against each other, with there own personal agenda of winning an NBA championship for there struggling team. The Warriors can smell NBA Finals victory, as they haven’t had a taste of it since 1975 with their then MVP Rick Barry. Many players that have since come and gone, but none that could take the Warriors back to this almost forgotten level. It wasn’t until Stephen Curry stepped into the arena that the Warriors were able to even dream of being in the playoffs, but they would never have imagined that they would be one of the two teams left standing in the 2015 season. For Curry, born from an NBA lineage as the son of former NBA player Dell Curry, basketball has always been a part of him, but like the Warriors, he has had to fight to prove his worth. Widely recognized as the best shooter in the NBA, Curry has had to practice endlessly to gain and maintain that title.

Due to Stephen’s small size and weight, 5’6” and 125 lbs his freshman year of high school, father Dell recalls spending summers practicing with him to become the best shooter he could be in order for his coach to realize that his size wasn’t an issue. As his senior year of high school was approaching there were no big name colleges offering Curry any scholarships. In the end he chose to go with his father’s alma mater, Davidson College. Still short compared to NBA players, Curry finally grew into his 6’3” height his sophomore year of college and shined throughout his college career as the top scorer at Davidson, also becoming the NCAA’s leading scorer.

In 2009, he was selected by the Golden State Warriors as the 7th pick of the NBA draft. He took the Warriors to the Playoffs in 2013 and 2014, averaging 24 points a game. Shooting three pointers in tight spots, his shooting skills were off the roof and his ball handling has been the best the NBA has seen in years. Curry has taken leadership of the Warriors, becoming a player that his teammates can depend on and his city can be proud of. The undersize, long shot kid that was once too short to be looked at as an NBA player has redefined the game and proven that he is among the best, winning the 2015 Most Valuable Player Award. Because of him and his redefined team, he has made the Warriors and their fans dream again. LeBron James and The Cleveland Cavaliers

With zero NBA Championship titles, the Cavs were an afterthought, with no expectations of ever winning or even making it to the Finals. Then 6’8”, 250 lbs LeBron James, came to the Cavs straight out of high school as the number one pick of the NBA draft in 2003. Born in Ohio, LeBron’s road to success wasn’t always easy. He never had a stable home due to his young single mother’s constant financial struggles, but LeBron was fortunate to have people who saw his talent and helped him be where he is today. His natural talent for the game was undeniable, and by his junior year of high school, LeBron had NBA players such as Shaquille O’Neal, Allen Iverson, and Kobe Bryant coming to see him play.

LeBron was the best thing that ever happened to the Cavs, taking the team to the NBA Finals in 2007. Though they didn’t make it to the Finals the following seasons, they were optimistic as they had the best player in the NBA on their team. LeBron was the light at the end of the tunnel for the Cavaliers, but the light was soon shut off when he decided to leave the Cavs in 2010 and play for the Miami Heat, creating a swell of hatred among Ohio fans, who felt betrayed that LeBron was leaving his home for a team that was already among the best, leaving the Cavaliers weak and talentless for the years of his absence.

After winning two NBA Championships with Miami, LeBron declared his comeback in 2014 to the Cavaliers, once again turning on the light of hope for fans and his city, who forgave his betrayal. His drive to win a title for his city has taken him all the way to the 2015 Finals and his talent has been the glue holding the Cavs together. His incredible offensive skills make him the best but his leadership skills have also made his teammates the best.

When we look back at the career of LeBron James and are asked to identify his prime years, it’ll probably be from somewhere around 2009-2016, or simply the five straight years he went to the NBA Finals. James admits that this is the best he has ever felt as a player. There’s no telling by how much or even if he will improve at all going forward in his career, but years from now we could be looking back at the 2015 NBA Finals as peak LeBron James. No matter what the outcome was, both teams have proven to be the best of the 2015 NBA season, and the talent of their MVPs has been the driving force for each team. As for Curry and LeBron, their dream of winning a championship has been very personal. Both are competitors and want nothing more than to continue making their teams excel in the only way they know how- by winning. As our readers look forward to the 2016 NBA season we hope to see both of these MVP players succeed and we expect to see them battle it again in the 2016 NBA Playoffs.