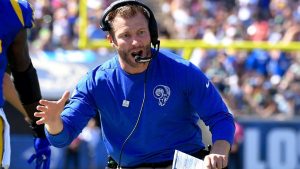 Coming off of a very successful NFL season in 2018, fans across the nation have high expectations for the Los Angeles Rams this season. Being the 2018 NFC West Champions, as well as making it to the Super Bowl was no small feat. Also, Rams’ players Aaron Donald, Todd, Gurley, and Marcus Peters were on ESPN’s Top 100 players for 2018, whom were all contributing factors to their victorious team. However, it is still up in speculation as to how this season will turn out. Spectators anticipate another exciting Rams’ season under the supervision of head coach Sean McVay.

Rams Coming Back To LA 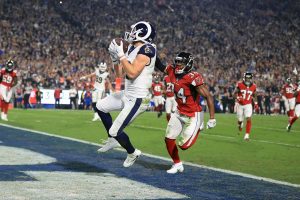 The Rams’ franchise was first founded as the Cleveland Rams, which joined the NFL in the year of 1937. In the beginning, the team never did better than a .500 mark once in their first six seasons. However, nothing big was able to take off until owner Dan Reeves pushed to move the franchise to Los Angeles in 1946. As a result, the NFL was able to become the first professional coast-to-coast sports entertainment industry. During their time representing Los Angeles, they gained four NFL Western division championships and in 1951 they were able to earn their second NFL title. The Rams continued there until 1994 when the team moved once again, this time heading to St. Louis.

In the year of 1999, the Rams became Super Bowl XXXIV champions by beating the Tennessee Titans 23-16 under the Rams’ standouts, quarterback Kurt Warner and running back Marshall Faulk. After many transitions in the franchise, the Rams finally headed back to Los Angeles in 2016. Sean McVay was hired as the new head coach in 2017 and thus, their successful streak began once again. 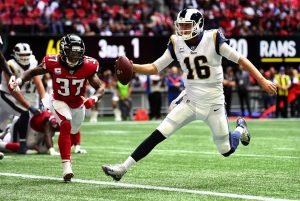 A little more than halfway through the NFC West, it is difficult to predict the season for the Rams. Last year, they came out notorious as the NFC West Champions, having the season standings of 13-3. However, the Rams with a great start of 3-0 they later got to a bumpy ride losing three games in a row. Among them, are the San Francisco 49ers, whom they lost to 20-7. The 49ers are proving to be big rivals who currently have the standings 7-0, a seven game winning streak. The Rams managed to break their losing streak, dominating 37-10 against the Atlanta Falcons. Unfortunately for the Falcons, they were defeated in their fifth consecutive loss and quarterback Matt Ryan left with an ankle injury. On the contrary, Rams’ quarterback, Jared Goff was able to snag two touchdowns and sweep 22 out of 37 passes for 268 yards. 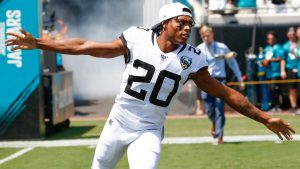 On October 15, Rams fans were taken by surprise when word got out that Los Angeles traded two of their first round picks and a fourth-rounder for Jacksonville Jaguars’ cornerback, Jalen Ramsey. Many fans and spectators in the NFL have their doubts on the trade as Ramsey may demand to be the highest paid player at his position. Their trade for first-round picks and a fourth-rounder also place the Rams in a difficult position in terms of future seasons. They may encounter challenges in budgeting money for the team and keeping up their roster to compete with other teams. In addition, Ramsey will become a free agent after the 2020 season. This pushes others to question whether the trade was really worth it. However, the Rams see this as an opportunity to gain one of the best players in the game.

Some speculate that this big trade was made in an effort to save their 3-3 standing at the time. Ramsey had missed the Jaguars’ past three games due to the birth of his second child and a back injury. However, he returned to play for the Rams at the Mercedes-Benz Stadium against the Falcons, just after two days of practicing with his new team in Los Angeles. In attempt to prove that the Rams made the right choice, Ramsey covered for Falcons’ Julio Jones and was successful in forcing several incompletions. He also completed a big play, causing a fumble from Devonta Freeman.

Starting at the beginning of Ramsey’s NFL career over three years ago, he was selected by the Jacksonville Jaguars in the first round with the fifth overall pick in the 2016 NFL Draft. Not only was he the earliest drafted cornerback in Jaguars’ franchise history, but Ramsey was also the highest selected cornerback in the draft. With big achievements early in his career, many expect him to be a strong addition to the Rams.