Cinco De Mayo weekend just got a little more exhilarating with a huge showdown happening in Vegas with Mexican boxer Saul ‘Canelo’ Alvarez (51-1-2, 35 KOs) and New York City native Daniel ‘Miracle Man’ Jacobs (35-2, 29 KOs) facing off against each other this Saturday, May 4. This is one of the most anticipated boxing matches of 2019. 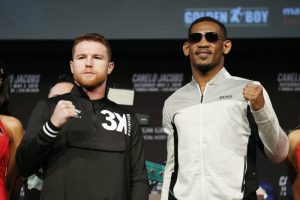 The event will be in the T-Mobile Arena with a boisterous crowd rooting for their respective favorites. This fight will be Canelo’s first time stepping into the ring for the year 2019, since his victorious defeat against Gennady Golovkin via majority decision for the WBA and WBC middleweight titles in their highly anticipated rematch. The seasoned fighter Jacobs has won his last three fights since losing to GGG in March 2017, coming back and better than ever! His most recent gain was Serhiy Derevianchenko via split decision in October to claim the IBF middleweight title. Jacobs is also returning to Vegas for this fight after an 8-year hiatus from the city of sin in lieu of his loss to Dmitry Pirog. 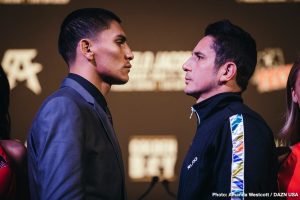 In addition to the main event, Vergil Ortiz Jr. (12-0, 12 KO) will face Mauricio Herrera (24-8, 7 KOs) in a welterweight battle as the co-main event. The 21-year old Ortiz looks to extend his knockout streak, with promises to knock out any foe he encounters, while facing the 38-year old veteran who’s age doesn’t prove to defy his skills in the ring. The experienced Herrera uses his skills when testing the strengths of his younger counterparts. 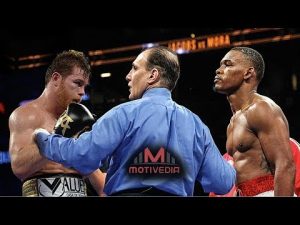 ‘Miracle Man’ Jacobs, the IBF middleweight champion, is predicted to box and move Canelo from the outside with continuous jabs and pops to his face. He can confidently pull the upset over Canelo by switching his stances and planting heavy counter shots. Canelo on the other hand has an advantage of dissuading his opponents with his well-timed right hands and his strategic brutal body punching that targets the upper body torso. UPPERCUT Boxing Magazine predicts that the tenacity, power and speed of Canelo will be to his advantage as he squares up against the seasoned Jacobs who has impeccable footwork. The moment of truth airs Saturday, May 4 th at 6 p.m. PST (9 p.m. EST) on the online sports streaming service DAZN.

There are no upcoming events.