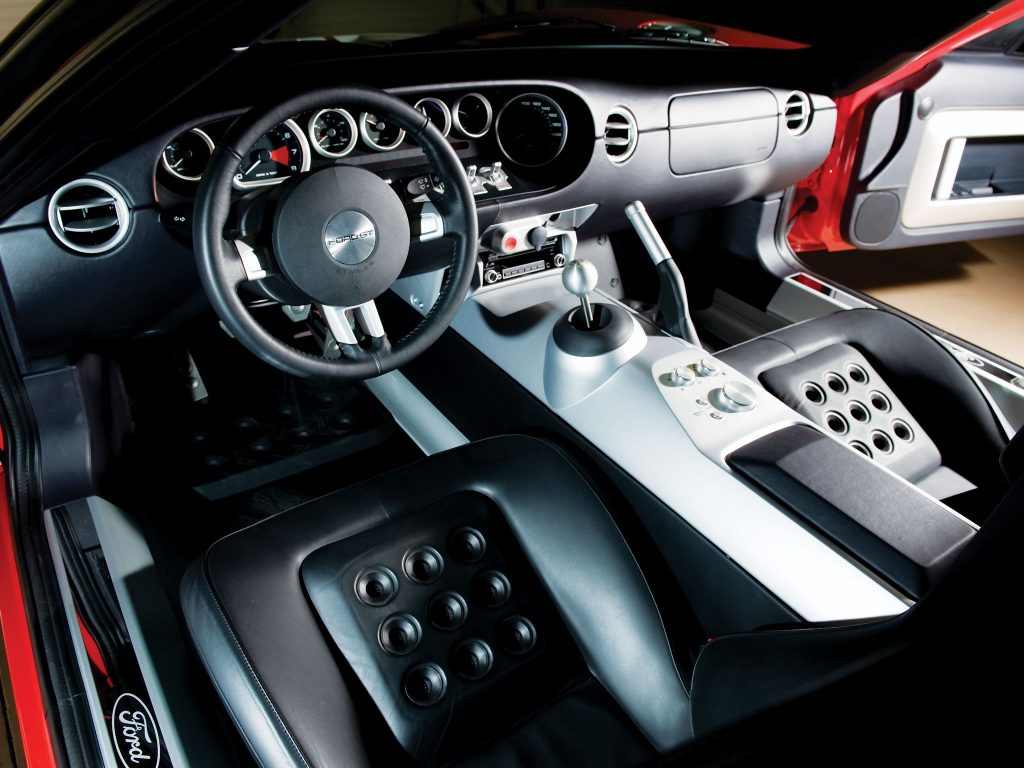 “We can build it. We have the technology.”

No, I’m not referring to Steve Austin, the fictional hero of the mid-1970s television drama The Six Million Dollar Man. What I am referring to is the new supercar engineered by Ford that is reminiscent of that groundbreaking show about futuristic, bionic technology. The Ford GT comes equipped with 647 horses under its hood, 550 lb-ft of torque and a top speed of 216 mph while weighing in at 3,045 lbs. But before we get down to the nitty gritty with this road beast, let’s start with a little history lesson.

When it comes to supercars and racing, the 24 Hours of Le Mans endurance race is the Kentucky Derby, Super Bowl and World Cup all rolled into one. Amazingly, in 1966, the Ford GT40 placed first, second and third in the celebrated race and continued its mastery by winning the Le Mans for the following four years. So suffice it to say that the Blue Oval and 24 Hours of Le Mans have shared quite a history. Now, 50 years after its historic top-three finish, Ford has finally released a car worthy of the “GT” name–and this time with an even more exclusive price tag.

Besides being even more aesthetically pleasing than the Batmobile and boasting greater technology than the inside of Iron Man’s suit, it’s the pure innovation that truly sets the Ford GT apart from its exotic peers, such as the McLaren 675LT and Ferrari 488 GTB. 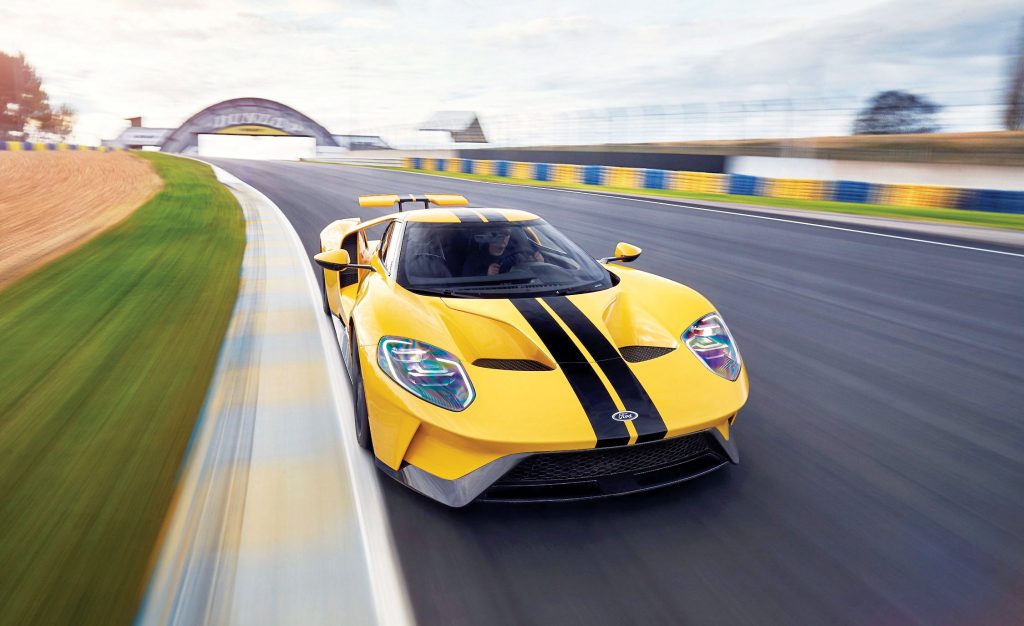 Dave Pericak, head of Ford Performance, and Raj Nair, Ford executive vice president of global product development and the man many refer to as the “father of the GT” are the individuals we have to thank for this modern technological marvel. The five modes that allow the driver the freedom of taking the GT out on the open road anywhere, anytime and in any weather are made possible by the car’s twin-turbocharged 3.5-liter ExoBoost V-6 engine. To help control this virtual bullet of an automobile, the GT comes with carbon-ceramic brakes and 20-inch wheels wrapped nice and snugly by Michelin Pilot Super Sport Cup 2 tires. But it’s the active aerodynamics that has people talking. The full carbon-fiber construction and body panels complement the cabin’s teardrop shape and the GT’s flying buttresses, which hide the piping and intercoolers as well as the twin turbochargers mounted in the rear sponsons. The rear spoiler is hydraulically actuated, much like the suspension and even changes shape at speed. This is all possible due to a small cam inside the rear wing that adjusts the gurney flap up and down to compensate for high speeds. For lack of better words, we’re basically dealing with a supercar with a monster truck’s engine power.

A Mode for Every Occasion

Now let’s discuss the GT’s drive modes, shall we? All five modes are uniquely designed for any situation, whether you’re cruising down the Pacific Coast Highway, whizzing past fellow commuters on a rainy day or finding yourself on the Autobahn ready to see what this baby can really do. First, we have Normal mode, which features additional comfort suspension seating activated by a button on the center console. Normal mode also utilizes a nose-lift function that operates in the same manner as the comfort suspension. Wet mode, as the name would indicate, adapts for inclement weather by softening the throttle and transmission mapping. Now, it gets really interesting. As opposed to Wet mode, Sport mode sharpens the GT’s throttle response, engages an anti-lag system, loosens up traction control restrictions, and pops the rear spoiler up at 70 mph and back down at 45 mph. In Normal, Wet and Sport modes, the GT’s suspension is set high and the car’s rear wing deploys only at high speed. But in Track mode, the rear spoiler is automatically deployed and the car drops like a low-rider El Camino – one with over 600 horsepower! Dropping by 50mm, stiffening the suspension to a racecar level and deploying the rear spoiler create maximum down force so that the rubber can really hug the pavement. And finally, the pièce de résistance: V-Max mode. V-Max refers to the mode’s ability to reach maximum velocity by cleaning up the GT’s aerodynamic profile and dropping the rear wing. Oh, and this maximum velocity? 216 mph—11 mph faster than the 2004 edition of the GT.  That makes it the fastest Ford ever in history. 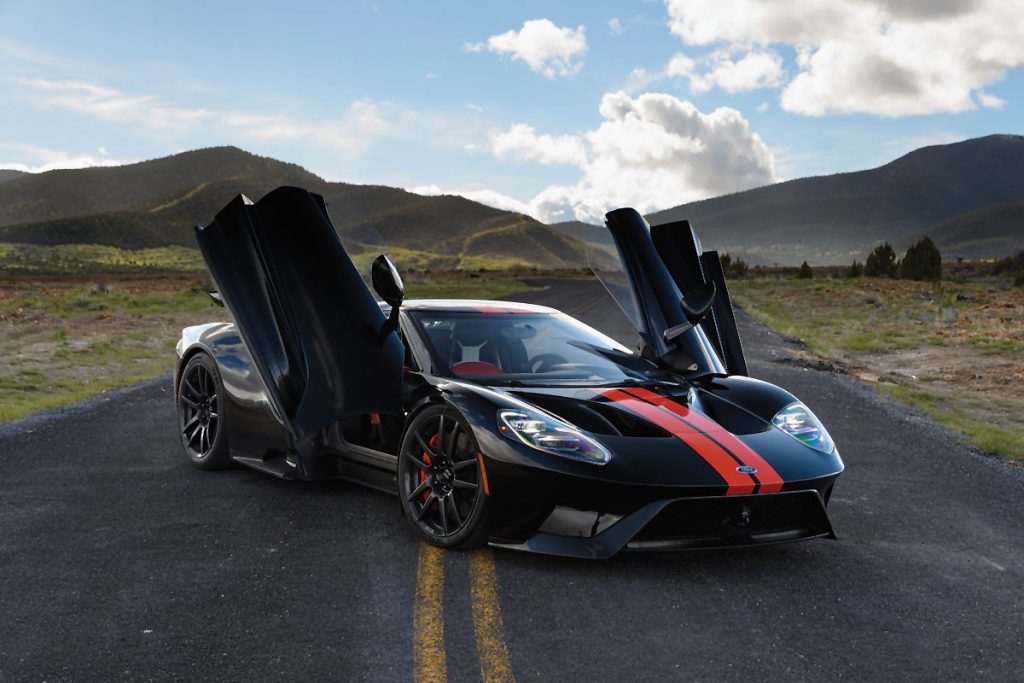 Careful – Don’t Look Directly At It

And if all of that wasn’t enough, now it’s time to admire the GT’s appearance. Much like Michelangelo’s Sistine Chapel, every detail of this masterpiece was strategically planned and engineered for the efficiency of the machine and the delight of onlookers. When you sit in the driver’s seat, you’ll notice that it isn’t adjustable. It’s in a fixed position within the carbon-fiber tub, and the steering wheel and pedals adjust to the driver. The finesse and detail exhibited by the engineering evident in the cabin is enough to draw even a calligrapher’s attention. Raj Nair explained that the Ford team calculated how close together they could put the passengers and then wrapped the cabin around them. Whereas most would assume that a supercar would have a dash evocative of a pilot’s cockpit, the GT’s dash has few buttons.  That makes for a much more business-like layout. There’s also a central color touch-screen display that includes Ford’s newly introduced Sync 3 infotainment setup.  And a pair of paddle shifters located on the racecar-shaped “squircle” steering wheel allow for simple gearshifts. Located up front near the steering wheel, the GT’s air intake hides grille shutters that manage air pressure on the front wheels. Now let’s check out the outside of this beauty. The scissor doors have seen an improvement from previous versions.  They now hinge up and forward so as to not incorporate portions of the roof, making for a more seamless appearance and efficient entrance and exit. The wide front end should ring a few bells with Ford-heads, as it has clearly drawn inspiration from the classic Ford GT40. As you venture towards the trunk intent on loading your suitcase, “Fuhgeddaboutit”, as Donnie Brasco would say.  The lack of trunk space may be the only aspect of the GT that we can’t absolutely praise. 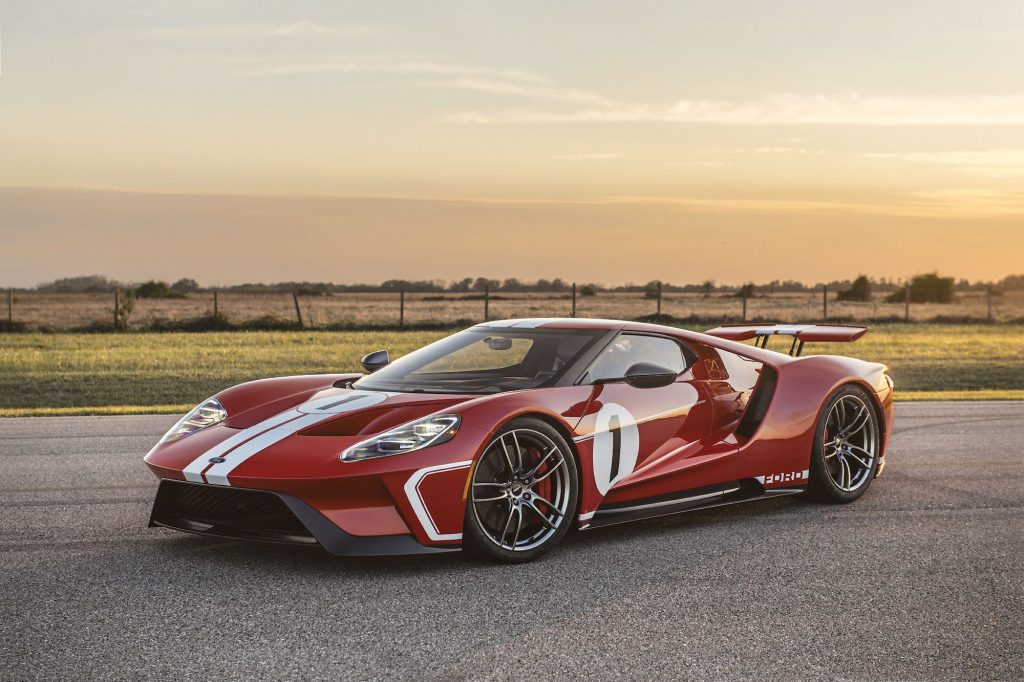 With comparisons to the McLaren 675LT and the Ferrari 488GTB, it’s no wonder the Ford GT is in high demand. The GT features 647 ponies, 550 lbs-ft of torque, a top speed of 216 mph, 11 mpg in the city and 18 mpg on the highway. The first GT will fly off the Markham, Ontario assembly line before December 21st of this year. Bill Ford Jr. and the rest of Ford have committed to a four-year production run with 250 of these beasts being built per year.

Oh, and if you plan on getting behind the wheel of one of these bad boys, get out your pocket book and get in line. The first years GT’s unfortunately all have owners and have been spoken for by celebrities and CEOs all over the world. Maybe if you start saving now, you can afford the $450,000-ish price tag by the time the next run is finished.