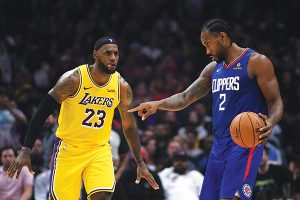 Though there is still much time left in the 2019-2020 NBA Season, the Los Angeles Lakers and the Los Angeles Clippers have already started the season with a bang. LA’s two NBA teams have been leading in the Western Conference and show no signs of stopping anytime soon. With new additions to each team, and new team dynamics, NBA fans in LA are overwhelmed and excited for the success that both teams have achieved so far. This season will be a thrilling one for the Lakers and the Clippers. 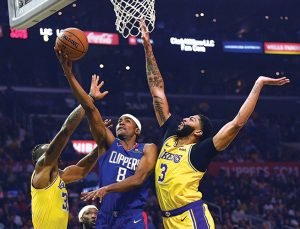 In the 2018-2019 season, both the Lakers and the Clippers were faced with challenges and difficulties advancing in the season. Determining their fate for the rest of the season, the Lakers played against the Brooklyn Nets, but lost 106-111, failing to advance to the playoffs for their sixth consecutive season. That year was the first season that LeBron James would not participate in the NBA playoffs since 2005. The Lakers ended in 10th place overall in the Western Conference with 37 wins to 45 losses.

The summer of 2018, when LeBron James was signed to the Lakers franchise, basketball fans were ecstatic; believing that it would be the year the Lakers finally would make a comeback. They had not won a championship for nine years and fans were raving on about the success this change would bring to the team. Unfortunately, injuries constantly occurred throughout the season, sitting players Kyle Kuzma, Brandon Ingram, Tyson Chandler, LeBron James, and more, out of important games for the team.

On the other hand, the LA Clippers managed to make their appearance in the 2019 NBA Playoffs. They made their way to 8th overall standings in the Western Conference, barely making the cutoff for the playoffs. However, they did not make it far, as the Golden State Warriors defeated them after the first round of playoffs. Out of the six games, the Clippers only managed to win two of them, with the scores, 135-131, and 129-121.

Though the Clippers lost in the first round, they put up an amazing fight against the defending champions Warriors. In the second game, the Warriors had been up by a 31-point lead and with 7:31 left in the third quarter, the score was 94-63. The Warriors began to relax and just as they were letting their guard down, the Clippers found their rhythm and made an extraordinary bounce-back, ending Game 2 with 135-131. 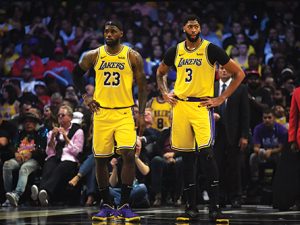 Making a tremendous resurgence in the NBA, the Lakers are in the lead for the Western Conference and showing all the signs of making the playoffs this season. In July of 2019, the New Orleans Pelicans finalized their agreement to trade Anthony Davis in exchange for Brandon Ingram, Lonzo Ball, Josh Hart, and three first-round picks. Davis has now risen to be one of the biggest star players for the Lakers with the highest paying salary on the Lakers after LeBron James. With Davis, James, Kuzma, Dwight Howard, and Danny Green, all coming together, the Lakers are one of the top contenders in the division.

However, with Davis suffering a back injury from the Lakers’ win against the New York Knicks on January 7th, his absence would impact the team’s performance. Earlier in the season, Davis had already suffered from a shoulder injury. Davis currently has the best record in the team, leading with 27.1 points and rebounding with 9.4 each game this season. Frank Vogel has to rely on Kuzma as his main power forward in the meantime, but there have also been rumors of swapping Kuzma for Sacramento Kings’ Bogdan Bogdanovic. Bogdanovic is averaging 14.5 points, 3.6 assists, and three rebounds each game and he would aid the Lakers in 3-point shots and playmaking where they are currently weak in. 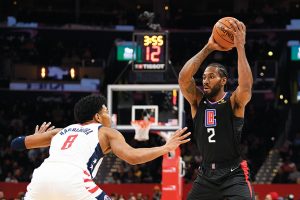 Barely making the NBA playoffs the previous year, the LA Clippers have now acquired some of the best talents in basketball today, with Kawhi Leonard, Paul George, Lou Williams, Montrezl Harrell, and Patrick Beverley. It seems that the Clippers have built a powerhouse team and bench, which could afford them to make one of the final four teams of the 2019-2020 NBA season.

Last year, the Clippers ended their season with a 48-34 record, but this season has drastically changed, as the Clippers are now one of the leading teams in the Western Conference. Before George had made his season debut, the Clippers had already own seven of their first 10 games this season. George’s perimeter defenses will pose to be an extreme challenge for their opponents. Beverley is also phenomenal for his ability to play defense from the point guard position. If they continue to perform in this manner, they are guaranteed a spot in the playoffs and there is a possibility that they will advance to the NBA finals.

This is really a great time to be a Los Angeles’ basketball fan with two power houses of teams and plenty of star players!